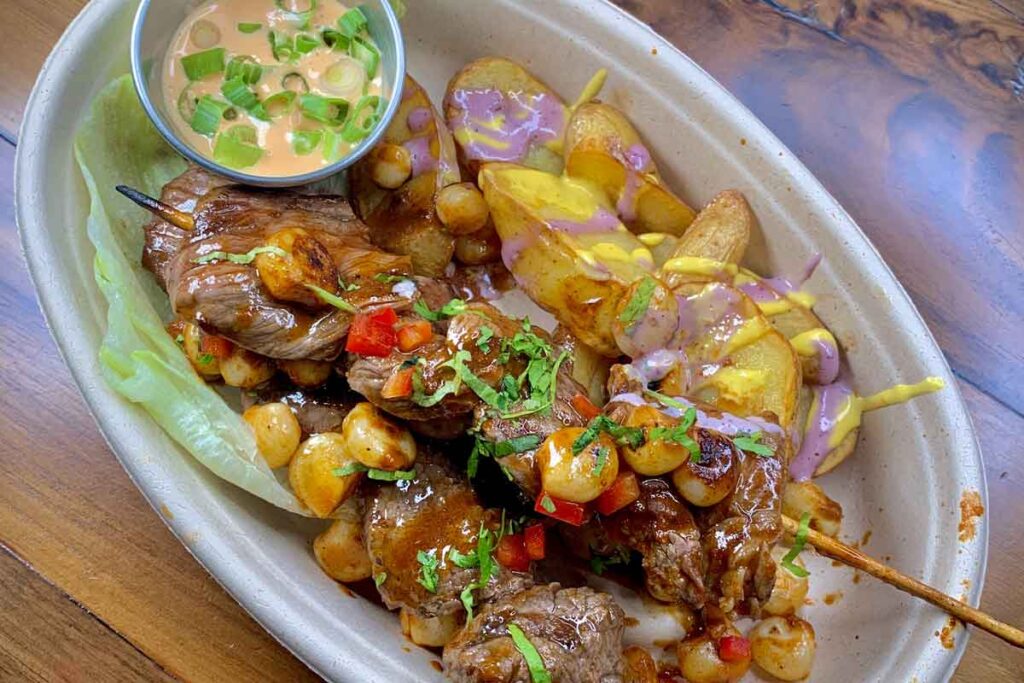 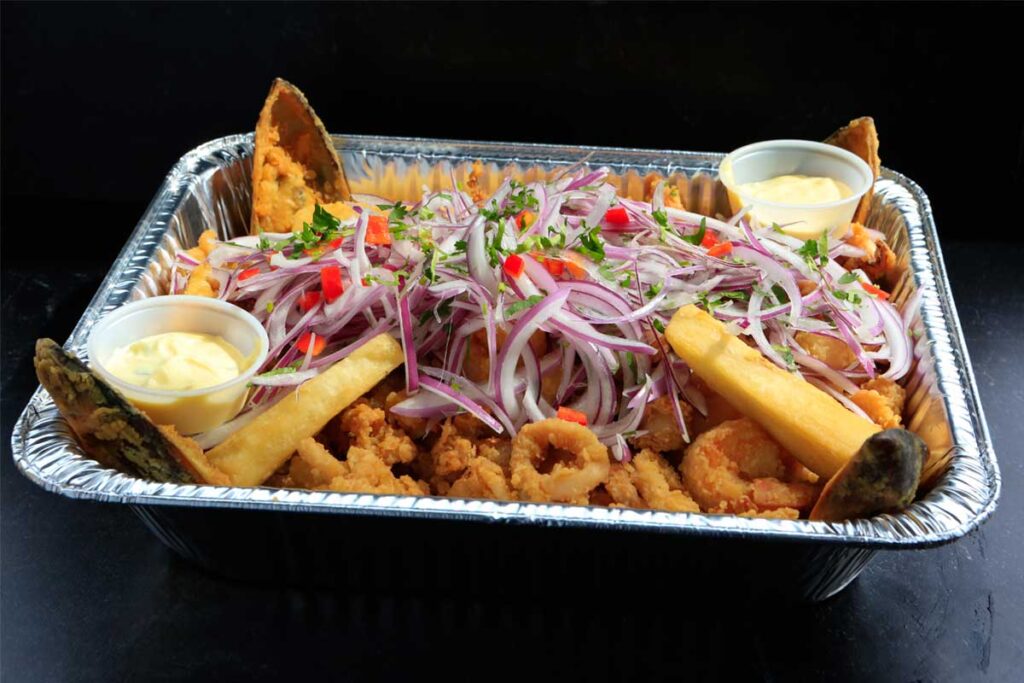 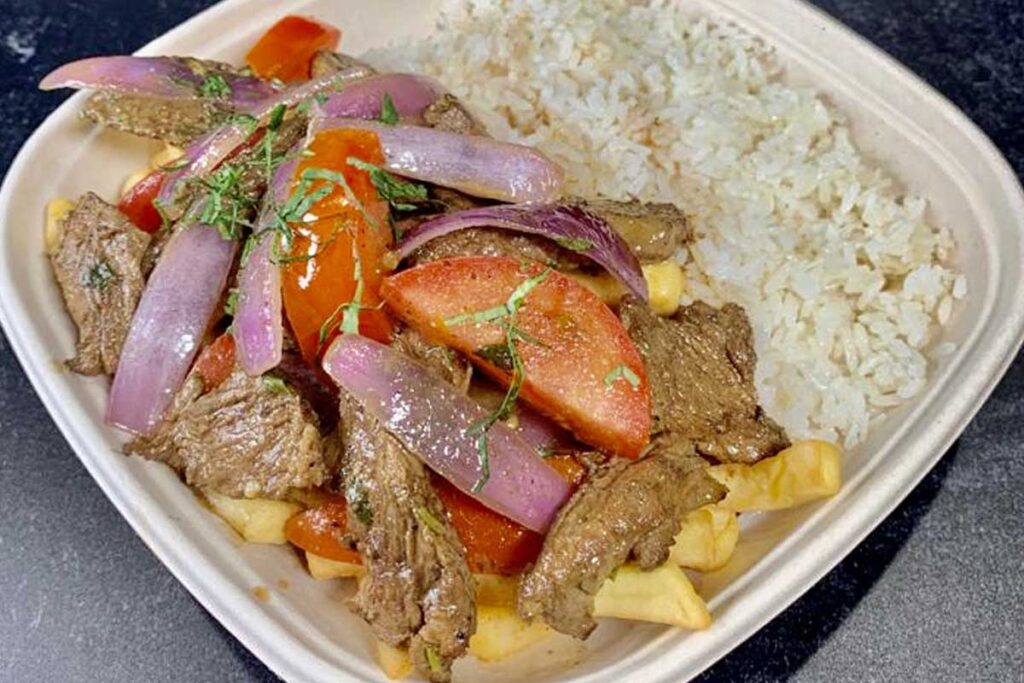 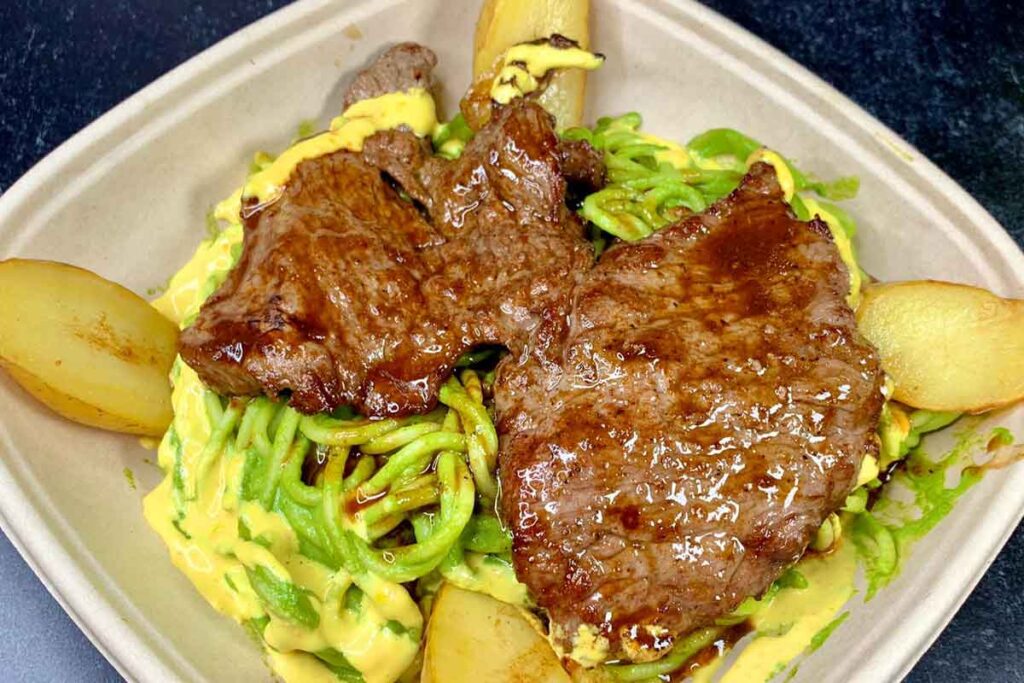 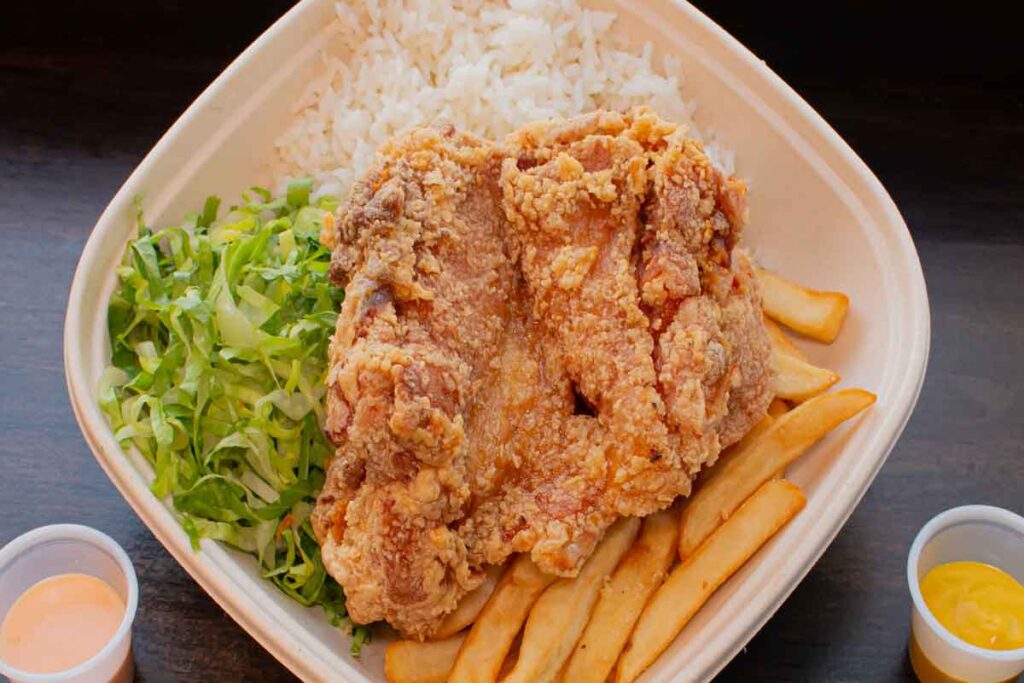 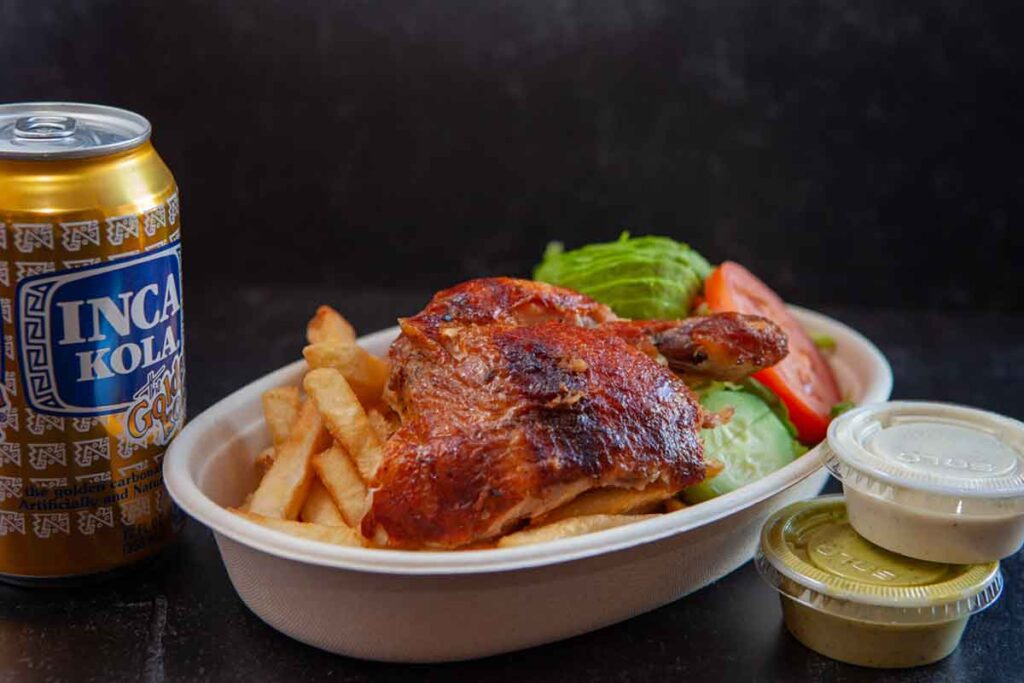 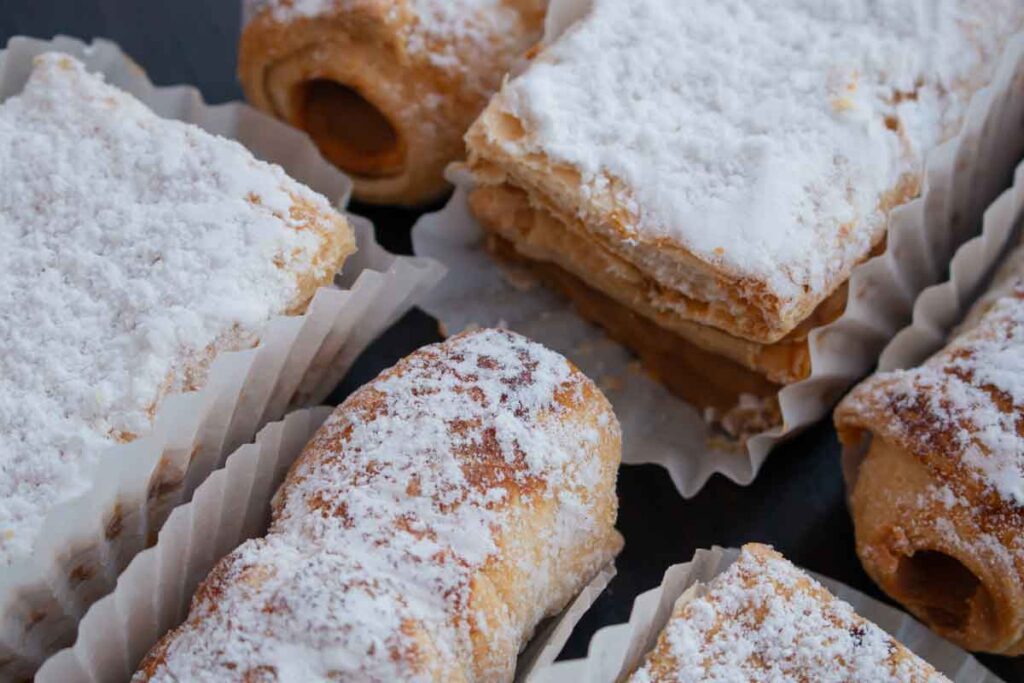 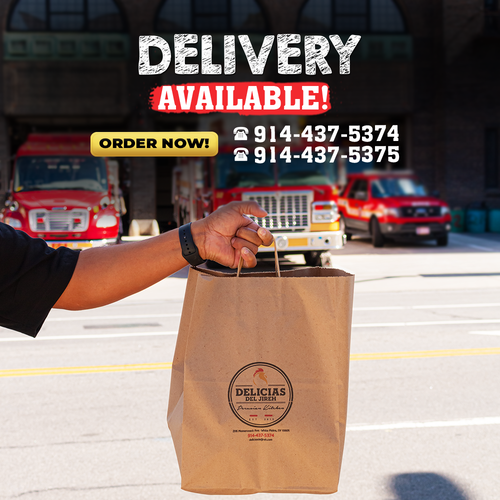 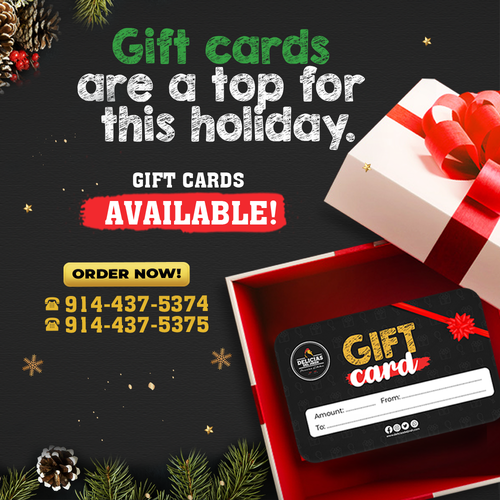 It all started in June 2012, when I and my wife dared to venture into the Peruvian gastronomic industry from our home kitchen. Cooking the famous “Market Cevichitos” that we sold for $5.00. People became addicted to that blessed recipe because when they tasted it, bought another because of how rich they were. We will never forget that on our first day, we sold 21 market Cevichitos among friends and family. After a couple of weeks, the market Cevichitos became a boom among the friends and family that we had on Facebook, a medium that we used to promote and sell our products. People always encouraged us to extend our menu. That’s where the idea of ​​cooking Peruvian lunch and delivering it to homes or workplaces came to life. The following year, I bought a van to deliver food at construction sites, factories in the area, or work centers. I did not only take lunches, but it occurred to us to take out the famous ‘Causa in a glass’ and our Grilled Chicken Salad. We also bought a very large cooler to store the cold drinks and a Thermo for the hot drinks. This way we had a more complete menu.

One day, someone told us about a Peruvian marriage, Cesar, and Patricia Torres, that made Peruvian desserts from their home, so my wife and I wanted to meet them. Today, they own their bakery in Bridgeport, CT, and they are our suppliers of most of our Peruvian desserts in the White Plains restaurant. This allowed us to have more items on our menu.

By the end of 2014, the business grew so much that we bought three outdoor kitchens and placed them on the patio of our house. We had two cooks apart from my wife and Don Julio who joined our team as our first delivery guy. I was in charge of answering the phone and covering the corporate deliveries. One day, my husband and I wanted to eat Peruvian Street Food, so we made a ‘Broaster chicken’ and ‘Salchipapas’ with all their creams, which were so delicious that we started selling them from our house. It became a drive-thru because customers were leaving work and coming straight to my house to pick up their food. A few months later, the name of our brand became known due to our promotion and our products.
I remember two very important stories:
First, some police officers from the city of White Plains liked our food so much that every time they saw our minivan on the streets at lunchtime, they would stop me to buy food.
To tell you the second anecdote I must mention an important friend, Martin Montoya. He was one of the first who believed in our products and insisted on introducing them to the American market. I remember that he bought many dishes just with the sole intention of making his American colleagues try our dishes. They liked the food so much that one day the manager of the store called me to make the first catering order for an event that they had in the store. Currently, we always work taking several catering orders for said store.
Martin, thank you for believing in us!

In 2015, the vision continued to grow so I felt that our dream of opening a restaurant was getting closer and closer. To make this happen, I decided to follow several important Peruvian chefs who lived in New York. I connected with them on social media, and I wrote to several of them, but many of them did not answer me. One of them did reply, Chef Ezequiel Valencia, to who I told and asked for a job. I was willing to wash dishes or help without the right to pay to learn from him, yet it never happened. I only said: “Someday I will have enough money to pay you for private classes”

At the end of 2015, many people wanted to associate with us. Nonetheless, there were only two people with who we believed we could associate one of them was Willy Cacsire, who currently is one of our partners in Delicias del Jireh / Peruvian Kitchen, White Plains, and to who we are very grateful. The other person is Yucy Lopez who helped us by lending us a significant sum of capital without any interest to which we are very grateful for her heart and life.

In March 2016, we started looking for a place, but it never crossed our minds to start our first adventure in Mamaroneck Avenue, the heart of downtown White Plains. In the opening process, I remembered Chef Ezequiel and we hired him. I received private classes and together we designed the first menu of Delicias del Jireh / Peruvian Kitchen.

On the day of the opening, many miracles happened. The first was on October 6, 2016, when we no longer had money to pay the rent. We were 7 days late and we could not open the restaurant because we had to pass the last inspection of the city. We called the building department and they told us that our last inspection had been scheduled for Tuesday, September 11th, a day after Columbus Day. The week was not over, and we needed to work. The day later came and the inspector in charge called us to confirm his appointment for Tuesday. My wife cried and begged so much that the inspector told us that he would help us. In five minutes, Inspector Luis Saiz called to let us know that on Monday he was going to come to the place to do the last inspection. When he arrived, he inspected everything and congratulated us because everything was in order. We asked him about our license, and he already had it printed out. I took it out of its folder and signed it. That is how we were able to open the restaurant from Friday, October 7.

When we opened it was a total success! People were making lines for days. The firefighters recommended we avoid problems with them by limiting the number of customers entering the restaurant to prevent any inconvenience. It was and still is a success! Currently, we moved from White Plains to Florida to continue growing because we believe that our vision has no limits, and we will continue working so that this company stays throughout our future generations.

I never mentioned the “bad times, problems, or bad processes” that we had to live, but that does not mean we did not live it. From contemplating divorce, betrayals of trusted people, administrative errors, and many more errors due to not having experience and being new to the business. We have not mentioned them because they did not have enough power to make my wife and I stay on the floor. Our focus and perception have led us to stand up strong. We are convinced that the vision that started one day in the kitchen of our house will be the business that transcends our future generations.

So do not give up!

Be strong and brave!

If God is with you, who is against you? 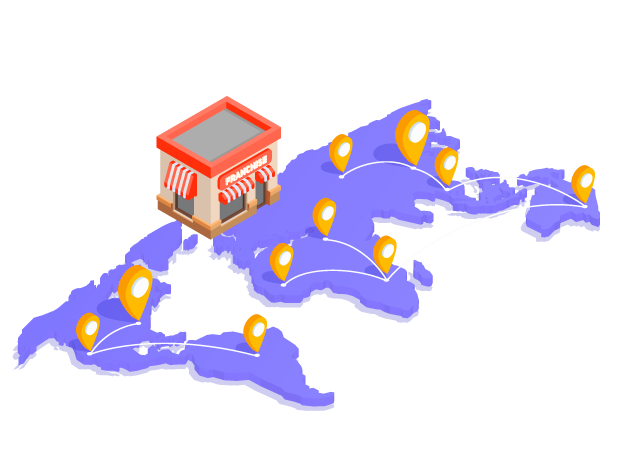 Start with a franchise!